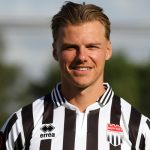 Striker Cody began his career with Penryn Athletic in the South West Peninsula League before joining Truro City in the summer of 2011. He spent seven seasons with the Cornish side, while studying for a PGCE in Sport Development at Plymouth Marjon University. In June 2018 he was offered a place at Jamie Vardy’s V9 Academy with the chance to win a contract at a professional club. This lead to a two year contract with Scottish Premier Division side St Mirren. A serious knee injury and a number of managerial changes at the Buddies made for a disrupted time north of the border and Cody returned to England in July 2020, signing for National League newcomers Weymouth. The 29-year old was released by the Terras at the end of the 2020/21 season and joined City in July. He was City’s top scorer for the 2021/22 season with 20 goals.