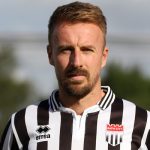 Vastly experienced midfielder Chris joined City in June 2022 from Stevenage Borough. After beginning his career as a 16-year old with Western League Bitton he joined the Bristol Rovers-backed Bristol Academy of Sport. He made his professional debut for Rovers in January 2006 and by the 2007/08 was a first team regular. He went on to make over 150 appearances for the Pirates before joining Sheffield Wednesday for £50,000 in August 2011. He played a major part in helping the Owls win promotion to back to the Championship but an injury at the start of the 2012/13 season saw him spend the second half of that campaign on loan at Milton Keynes Dons. He joined Port Vale in July 2013, where he would spend two seasons. In March 2015, though, he re-joined Bristol Rovers on loan, helping them return to the Football League via the National League play-offs. He made the move permanent in June 2015 and would spend another four seasons with the club. He was released in May 2019 with over 350 games and three promotions for the Pirates and a legend to Gasheads. He spent one and a half seasons with Northampton Town before moving on to Stevenage in January 2021. Despite still being a first-team regular for the Boro he was released in May 2022.