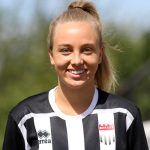 Playing history: I spent my younger years playing for Wiltshire County and Derry Hill United, where we won the league and both cup finals, and I was awarded the league’s top goal scorer with 50 goals in 27 games. I signed for Forest Green Rovers at 16 where I played for 3 seasons and helped the team gain promotion. I now play for Loughborough University alongside Bath City.

How I spend my free time: I’m currently studying sport science at Loughborough University where I also enjoy playing or watching any type of sport!