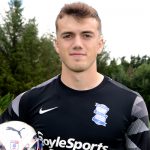 Bath-born goalkeeper Archie joined City on loan from Birmingham City in September 2021. He joined Swindon Town’s academy as a 15-year old in 2017 and in May 2019 signed his first professional contract. He spent much of the next 18 months out on loan, with AFC Totton, Thatcham Town and, locally, Melksham Town. Archie was back with Swindon in January 2021 and made his first team debut the following month after first choice keeper (and former City player) Joe Wollacott suffered an injury in the pre-match warm up. He was released by the Robins in May 2021 and signed for Birmingham City in August 2021.