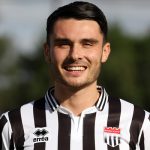 Striker Alex began his senior career with Plymouth Argyle in 2016, he signed a professional contract in 2017 and made 8 first team appearances before loan spells at Torquay United, Aldershot Town and Tiverton Town followed. He joined Tiverton permanently in the summer of 2020. The 23-year old arrived at Twerton Park in January 2021 but played just once before the season was halted. However, the 2021/22 season saw him net 19 goals and land the player of the year award.