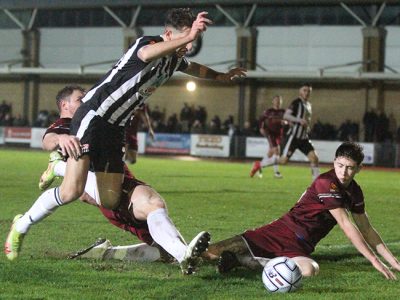 A controversial refereeing decision in the closing minutes denied City the chance to earn a hard fought point at Chelmsford City this afternoon. The Romans had trailed to a goal midway through the first half but were pushing for an equaliser when, with five minutes left, substitute Dave Sims-Burgess was fouled in the box by Winfield’s desperate lunge and the referee pointed to the spot. However, as Cody Cooke was reading himself to try to maintain his 100% penalty record this season, Mr Mackey, having been surrounded by home players, briefly spoke to one of his assistants before inexplicably changing his mind, instead awarding a corner. In a game which largely matched the drab and dreary weather conditions, the Clarets shaded the first half and deserved their narrow lead, Blackwell tapping in Jackson’s low cross on 26 minutes. Ryan Clarke had produced a great save just before this from a Blackwell free-kick, whilst City struggled to test the Essex side’s well-orgainsed backline. The second half saw City look a greater attacking threat, although it wasn’t until the final fifteen minutes they began to threaten an equaliser. Sims-Burgess spurned the best chance after home keeper Marsden weakly pushed a cross into his path, but he sliced the ball wide under pressure from a defender. However, he looked to have made up for the miss when he was felled by Winfield but the officials denied him this redemption. There was still time for City to earn a number of corners but they came to nothing and, shortly after keeper Clarke headed the final one over the bar the referee’s whistle ended a frustrating afternoon for the Romans.