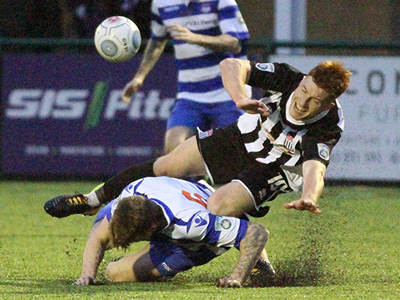 A penalty 15 minutes from time meant City had to settle for a point from this afternoon’s 1-1 draw at Oxford City. They had led through Ross Stearn’s strike just before half-time but over the 90 minutes a draw was probably the right result. The hosts enjoyed the better of the opening half-hour although there was little to entertain the Marsh Lane crowd with both sides guilty of squandering possession time and again. As the interval approached though City enjoyed their best spell of the game, with Stearn twice firing narrowly wide. And it turned out to be third time lucky when he latched onto Nat Javis’ 44th minute knock down to fire the ball through a crowd of players into the net. The game continued in a similar pattern after the break, although Oxford began to look more threatening as they switched to a more direct approach. They had blazed one great chance high over the bar but on 75 minutes Sinclair went down right on the edge of the box and the referee pointed to the spot. Paterson sent Luke Southwood the wrong way to level the scores. Neither side could conjure a winning goal after this to leave City in 10th place, still four points off the play-offs and unbeaten in 2018.