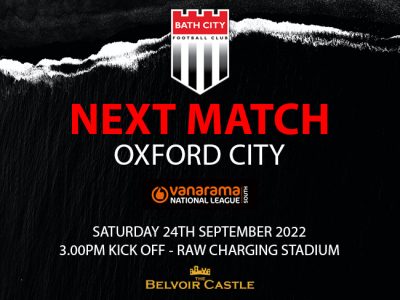 Having eventually overcome the considerable obstacle presented by Hartley Wintney in the FA Cup, City return to league action on Saturday when they travel to Oxford City.

Before the two knock out games City had taken part in a thrilling victory over Weymouth to reach a total of sixteen points from their opening eight matches. In contrast their opponents had lost three consecutive games away from Marsh Lane to Welling, Chippenham and Chelmsford before victory in the Cup over Salisbury last Saturday gave them a home tie against Plymouth Parkway in the next round.

The Hoops, managed by former Watford midfielder Ross Jenkins, will certainly look forward to returning to their base where having lost at home to Eastbourne on the opening day they have picked up six points from the visits of Concord and Hampton.

Consistency home and away led to a solid 2021/22 season for Oxford and they deservedly reached the playoffs. They lost just the one game in their opening sixteen and that was against the eventual champions. Former manager, David Oldfield, decided to test himself in the league above and left for Weymouth in January. However, the Hoops maintained their top seven place for their best finish since promotion to step two. In the playoff eliminator they beat Eastbourne Borough before losing the semi-final against eventual winners Dorking Wanderers.

In our two meetings last season there was a grand total of twelve goals scored although the majority were at the wrong end. City took the lead through Elliot Frear at Marsh Lane last August Bank Holiday but that was as good as it got. The home team proceeded to score five and, to make matters worse, Eddie Jones was sent off.

The return fixture at Twerton was the last match of the season and the two teams served up a thriller for over 1400 fans. Having taken a third minute lead through Alex Fletcher, City were 3-1 down on the hour mark but Jerry Gill’s players showed great character to draw level through Fletcher again and Tom Richards.

This will be our seventh visit to Marsh Lane since the first in 2016 and having remained unbeaten in the first four we have returned pointless in the last two.

Bath aside, there is probably no more attractive city to visit in National League South than Oxford. As well as many attractions, including the historic university buildings, famous museums and galleries, the city is blessed with some outstanding pubs and restaurants.

Unfortunately, as with so many of our destinations in this league, Marsh Lane is situated some three miles from the centre, requiring a bus or taxi trip and there are few facilities in the neighbourhood. However, there is excellent access from the nearby ring road so there is no need to drive through the centre if you are just interested in the match. The ground is neatly set out, with a good sized clubhouse and a 3G pitch.

There are savings to be made on admission if you purchase tickets in advance from the Oxford City website.

The eighty mile trip from Bath will take just under two hours. The Supporters Club will be running a coach and full details can be found on its website.

The train journey from Bath Spa will involve changing to a replacement bus service at Didcot and a further thirty minute bus ride to the ground from Oxford station.