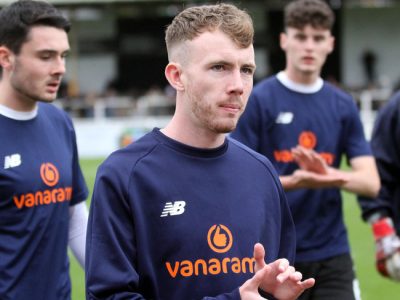 We caught up with Bristol City loanee Josh Owers about his time at City so far and with father Gary having managed the club while he was growing up, he has fond memories and a strong association with the Romans.

How are you enjoying your time at Bath City?

“Apart from a tough run of results, I’m really enjoying my football here, The manager, staff and players have been really good with me and personally I think I’ve put on some good performances but there is still more to come from me yet.”

How have you found the switch from U23 football to the National League South?

“Yeah, it is a lot different, The Conference South is much more physical I would say and much more about winning second balls and competing; saying that, there are still some very good footballing sides in the Conference South but I would say it is much more physical and the 23s is more technical. I think what is most different is playing on a Saturday afternoon at 3pm in front of fans instead of 12pm on a Monday in an empty stadium or training ground, the 3pm kick offs in front of all the fans just gives you that extra boost.“

How much did you know about Bath City, was it a no-brainer re-joining on loan after last season?

“Nobody needs to tell me anything about Bath City! I was 2/3 years old the first time I arrived at Twerton Park watching my dad as a player manager back then and I can still somehow remember it. Most recently then in my dad’s second spell as a 14/15 year old, I would watch City home and away most weekends and I used to love it. I even went to Margate away one time! I know an awful lot about the club and I even know the chairman, directors, volunteers and some of the fans. It was obviously disappointing when the season ended early last year as we had just beaten a very strong Havant and Waterlooville team at home and I felt as if we were about to go on a good run, but yeah, I’m happy to be back here playing lots of football.”

Did your Dad have any influence on you coming to Bath?

“Yeah he’s obviously very happy I’m here on loan because of his recent history with the club, but it’s about what best suits me right now and I would say it does, If I’m going to play in this league I would only want to play here. Some Bristol City players who have been here on loan before have gone on to have great careers, so hopefully I can follow in some of their foot steps.”

What targets do you have for the rest of this season on a personal level?

“On a personal level I want to play as many games as I can and to keep on improving every game hopefully. I would love to chip in with a few assists or goals if possible and as many three points to go with that if possible.”

How is the mood in the dressing room, is confidence good after recent changes and the win over Welling?

“The mood is really good in the changing room, we’ve got a great bunch of lads here and that win against Welling last week has done everyone the world of good, so hopefully we can put a good run of form together now.”

Finally, What is the target as a team for the rest of the season?

“Win as many games as possible and I don’t see why we can’t get in the play-offs come the end of the season.”