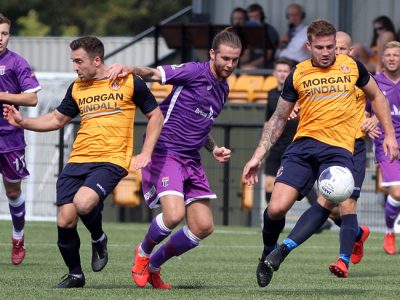 City suffered their first defeat of the 2019-20 season this afternoon after they conceded two late goals against Slough Town. The home side had taken advantage of a slow start to the game by City, Roberts’ 13th minute shot squeezing under Ryan Clarke to give them the lead. City responded well to this setback and deservedly levelled on 24 minutes. A ball into the box saw Tyler Harvey and Sam Togwell challenge and whilst both sides were appealing for handball, the City no.9 drove the loose ball into the net. City were now in control of the game and seven minutes before the break Tom Richards’ stunning 25-yard shot found the top corner to put them ahead. The second half saw City struggle to recapture this attacking impetus and they suddenly found themselves struggling to get the ball out of their own half. Is still looked like they would cling on to their narrow lead as the game entered its closing stages but with three minutes left Williams lashed home an equaliser. And four minutes into stoppage time it got even worse for the Romans when the ball dropped to Harris in the box to volley past Clarke and complete the turnaround.