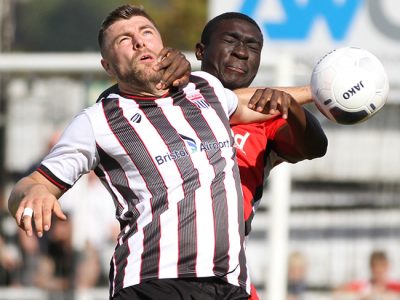 A late Harry Hamblin goal rescued a point for City after two second half mistakes looked to have gifted Eastbourne Borough the points at Twerton Park this afternoon. In front of another big Community Day crowd City had dominated the first half. Ross Stearn had curled a 25-yard free kick inches wide before a snap-shot from Dan Rooney dropped the wrong side of the post. City’s pressure finally told on 25 minutes when Stearn’s deflected shot looped over Hadler into the net. Ryan Clarke was called into action for the first time a couple of minutes later to push Walker’s free-kick away. Stearn then just failed to get on the end of a beautiful Joe Raynes cross on the half-hour mark. Not for the first time this season City failed to maintain this control after the interval. On a rare attack they almost grabbed a second goal when Hadler could only parry Stearn’s shot but Brunt and Tom Smith got in each others way as they looked to turn home the loose ball. When Harry Smith headed Debrah’s header off the line with 15 minutes left it looked as if City might hold out for the narrow win. However, they then gifted Borough two goals in three minutes. First Raynes allowed Luer to nick possession and stride forward before stroking the ball past Clarke. Then a wayward pass from Hartridge sent Romain bearing down on goal and his shot found the corner of the net. City looked down and out at this stage, given the self-inflicted nature of the turnaround, but with three minutes left Eastbourne failed to clear a free-kick and the ball dropped for Hamblin to lash it home via the underside of the crossbar. And remarkably substitute Andy Watkins almost won the game in stoppage time only for Hadler to deny him with a fine block.