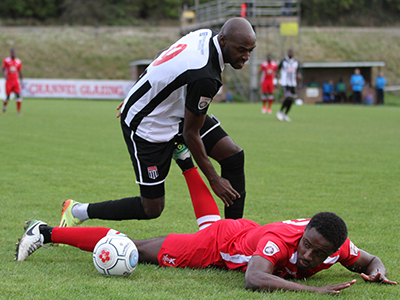 City’s search for a first league win under Jerry Gill continues after they could only draw 1-1 at bottom side Whitehawk this afternoon. They had led through Jamie Lucas’ penalty just before half-time and it looked like this would be enough to overcome the winless Hawks. However, with eight minutes left Lyons-Foster headed home a free-kick to secure a deserved point for the home side. After a quiet opening it was the Hawks who began to enjoy the greater possession but sights of goal for either side were few and far between. Just when it looked like the game would reach the break goalless Essuman was somewhat harshly adjudged to have handled the ball in the box but Lucas took full advantage, sending Dieng the wrong way from the spot. The pattern of the game changed little into the second period, the Hawks enjoying most of the ball with little end product and City looking to break forward when they won possession. One such break midway through the half ended with Andy Watkins clearly being thrown to the ground by Essuman but, incredibly, this time the referee didn’t point to the spot. Finally, on 82 minutes Whitehawk levelled when Lyons-Foster got across the front of City’s defence to head the ball past Southwood. Both sides had chances to win the game after this but failed to take them, leaving City to reflect on another disappointing afternoon during the long trip back to the West Country.