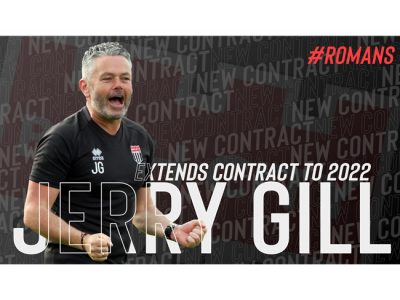 Bath City FC is pleased to announce that Manager, Jerry Gill, has today signed a new contract that sees him extend his stay at the first team’s helm until the summer of 2022.

The Club has been in discussions with Jerry since the conclusion of the 2019-20 play-offs and reached agreement last week, with Jerry putting pen to paper after training today.

An enthused Jerry said, “I am delighted to sign my new contract for the next two seasons. When I first walked in the door, I talked about a long-term project and signing this deal enables us to build further on the success of the last two seasons. Finally, I would like to thank the Board in supporting me and my vision going forward.”

Chairman of Football, Paul Williams added, “I am pleased to see Jerry extend his contract with the Club as we look to build on the excellent work that has been achieved so far. I look forward to continuing to work with Jerry and his team of players and staff as we progress further.”

Jerry Gill took over the reins at Twerton Park on 5th October 2017 and has overseen improved league positions and points tallies in his two full seasons, with a fourth placed finish and Points Per Game total of 75.6 points for the recent Covid-affected 2019-20 season representing our highest finish since 2011-12. Crowds have also increased dramatically as fans have responded to the team’s progressive style and the community owned Club’s efforts to increase awareness and improve the matchday experience, with average crowds topping 1,000 for the past two seasons.

New season fixtures will be announced on Tuesday 8th September and the Club hopes to be able to give fans news of ground capacity and matchday arrangements soon.

We look forward to our pre-season programme beginning on Tuesday 1st September and the regular season commencing on Saturday 3rd October, with Jerry leading our challenge for promotion.