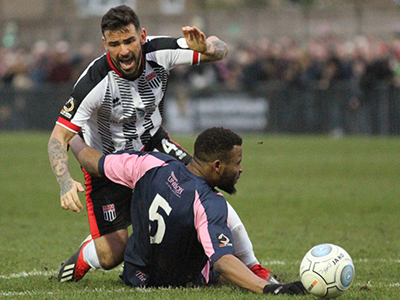 City had to be patient at Champion Hill this afternoon before two goals in the closing stages of the game gave them a deserved win over Dulwich Hamlet. They began the game as if they were looking to blow away Dulwich just like they had to Chippenham Town on New Years Day. However, apart from a couple of off target headers from Adam Mann and Ross Stearn they couldn’t turn this fast start in clear openings. This allowed the home side to grow into the game and it took a great save from Ryan Clarke, diverting Thompson’s deflected shot onto the post, to deny them a 17th minute lead. Their attacking threat was blunted though by being caught offside time and again and City finished the half on top once more, Chambers producing a great block to deny Tom Smith and Mann testing Preston with an acrobatic volley after good work from Stearn. The second half was initially a more scrappy affair, though it was still City who looked the more likely scorers and with 17 minutes left they broke the deadlock. Dulwich failed to deal with a James Morton free-kick and the ball dropped to Smith to smash it into the roof of the net. And eight minutes later City ensured the points would be heading back West when a long ball forward was headed over his own keeper by Chambers and Stearn got the final touch just before it crossed the line. This allowed City to comfortably see out the remaining time to move up to 4th place in the Vanarama National League South table ahead of Tuesday night’s trip to Slough Town.