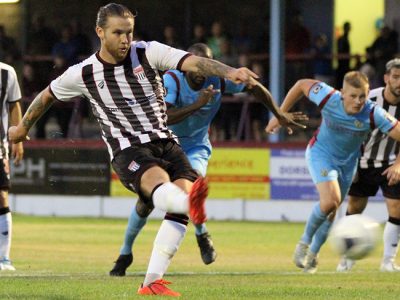 City overcame two further additions to their growing injury list and an impressive Weymouth performance to earn a point in a 1-1 draw on the South Coast this evening. Already missing three players though injury – plus the suspended Ryan Brunt – they also lost goalkeeper Ryan Clarke to a pre-match ankle injury, handing 17-year old Harvey Wiles-Richards his league debut. And with the game just 10 minutes old Ross Stearn suffered a nasty head injury following an accidental clash with teammate Tom Smith. By then City were already a goal behind after Alex Hartridge deflected a 5th minute corner past Wiles-Richards. Filled with confidence by this perfect start to the game the Terras went onto dominate the rest of the half, though only once did they test Wiles-Richards, Harfield warming his hands with a well-struck shot. City’s only real sight of goal saw Tom Smith fire wide of the goal and manager Jerry Gill had strong words for his players at the break. And immediately from the restart it was clear the players had taken on board his thoughts as they began to match the hosts effort and workrate, which finally saw them pose an attacking threat. Despite this improvement they should have found themselves two goals adrift on 49 minutes when dangerman Baggie set up McQuoid but he blazed over the bar with the goal at his mercy. And eight minutes later City levelled from the penalty spot. Keeper Ward initially saved well from Andy Watkin’s shot but his attempt to deny Adam Mann a follow-up effort saw him upend the no.8 and Tyler Harvey confidently stroked home the spot-kick. Both sides went in search of a winning goal after this but clear cut chances were hard to come by, Mann scuffing City’s best opening straight at Ward and McQuoid shooting to close to Wiles-Richards after good build-up play. City almost grabbed the win late on when Hartridge shot narrowly wide after a well-worked corner routine, but in the end it was very much a point gained for City on a testing evening.