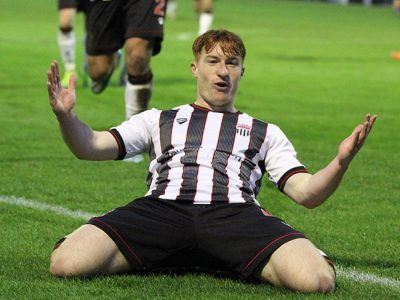 City made it four league wins on the bounce with a battling 3-1 victory over Concord Rangers at Twerton Park this afternoon. The Romans got off to the perfect start when after just six minutes Adam Mann’s deft touch on a Sam Pearson cross was enough to divert the ball into the net via the far post. City looked in control of the game but the visitors stunned them with an equaliser out of nothing on the half hour mark. Ryan Clarke did well to initially save Sheriff’s shot but Clifford just reached the loose ball ahead of City’s keeper to slide it home. However, City regained the lead ten minutes later when a cross was only cleared as far as Noah Chilvers and he steered home a precision shot from the edge of the box. Early in the second half Dan Bowry’s header produced a great save from Haigh, the follow-up seeing Cawley clear Alex Hartridge’s shot off the line, before Concord enjoyed their best spell of the game as City struggled to get out of their own half. Defensively City stood firm to the pressure though and on 74 minutes they gave themselves breathing space with a trademark 20-yard strike from Tom Smith. Moments later Clarke produced a stunning save to keep out Pollock’s header. This was as close as Concord would come as City comfortably closed out the remaining time to secure the three points.

City’s Somerset Premier Cup 2nd Round match against Taunton Town, scheduled for Wednesday 13 November, will now be played at a later date as the Peacocks are involved in a FA Trophy replay next week instead.