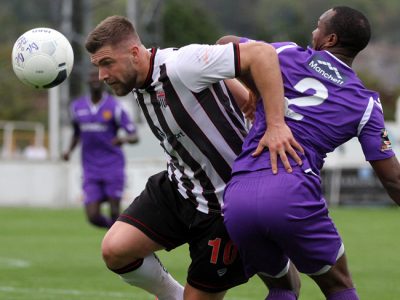 A 95th minute penalty by Ryan Brunt rescued a point for City this afternoon against Maidstone United at Twerton Park. It had looked like another disappointing outing for the Romans with the visitors leading thanks to Johnson’s header on 76 minutes but with the four allotted minutes of stoppage time about to elapse a high ball into the box saw keeper Lewington come racing from his goal and crash into the back of Brunt as he shielded the ball. It was as clear a penalty as City were denied in the FA Cup last week but thankfully this time the referee got it right and Brunt showed nerves of steel to lash the ball into the roof of the net from the spot. Over the 90 minutes a draw was probably the right result as both sides enjoyed spells on top without ever taking full control of the game. Maidstone started the game well but didn’t test Ryan Clarke until midway through the half with a header that he saved at his near post. After this City began to impose themselves on the game, the closest they came to breaking the deadlock was a goalmouth scramble on 33 minutes that the Stones did well to defend. The second followed a similar pattern and when Ross Stearn’s 30 yard free-kick struck the post in the 70th minute it looked as if the game was heading for a nil-nil scoreline. However, Johnson’s header into the roof of the net from a corner six minutes later changed this and set up the late dramatics.