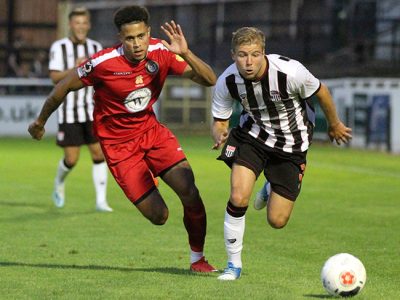 City overcame Hungerford Town by two goals to one at Twerton Park this evening to move to the top of the Vanarama National League South table. It was another thoroughly warranted win as they controlled the game for long periods, although the visitors last gasp goal did give the Romans a nervous final few minutes. After an early header over by Alex Hartridge, City enjoyed the majority of possession, passing the ball around well and probing for gaps in the massed ranks of red shirts defending the Hungerford goal. And their patience paid off seven minutes before the break when a Connor Riley-Lowe corner was diverted toward goal by Harvey Smith where keeper Siviter and Johnson-Schuster appeared to get in each others way allowing the ball to find the net. The second half saw little change in the pattern of play and on 64 minutes City doubled their advantage when Siviter could only parry Harry Hamblin’s shot into the path of Ross Stearn to steer it home from 10 yards. City came close to adding a third goal on several occasions but when Halliday slid the ball past James Pardington in the 90th minute it suddenly meant an unnecessary tense four minutes stoppage time. However, there was no further late drama to deny City their third deserved win of this fledgling 2019-20 season.