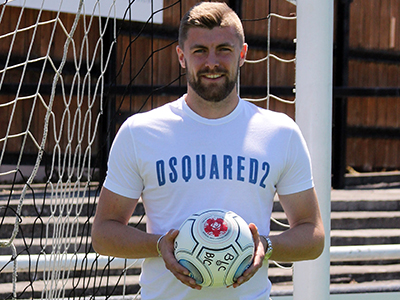 At the end of another busy week at Twerton Park, City can confirm a third new signing with the arrival of Ryan Brunt from Exeter City. The former Bristol Rovers and Plymouth Argyle striker spent the 2017-18 season with Exeter after a serious knee injury in March 2015 whilst with the Pilgrims sidelined him for nine months. Despite a return to full fitness he couldn’t break into the Grecians first team and was released in May 2018. The 25-year old’s availability attracted interest from a number of clubs but he accepted City’s offer and we wish him all the best during his time with the Romans.

On signing , Ryan said “Happy to be here. Real exciting time for me, fit and ready to go just need some game time. A good thing for me, a pull was that I knew five or six of the lads. I spoke to Dan Ball and he was full of praise for everyone.”

Asked how the signing came about manager Jerry Gill said “ I had been talking to Ryan over the close season, he is hungry to come in and play regular football and we are delighted to get a signing of his stature to the club. He fits us as a person and joins a squad full of characters who want to win and come here to enjoy their football.”

Along with fellow new arrivals this week, Adam Mann and Robbie Cundy, Ryan will join up with the rest of the squad tomorrow (Saturday 30 June) as pre-season training gets underway.