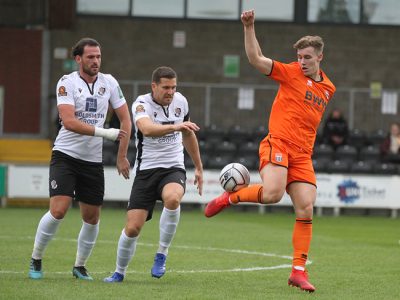 City’s long wait for a positive result at the home of Dartford continued this afternoon with a single goal defeat to the Kent side. The decisive goal came just four minutes after an extended half-time interval, whilst a replacement official was summoned after one of the assistants suffered a calf injury, but City could have few complaints as they struggled to test a Darts defence that is yet to concede a league goal this season. The first half was largely controlled by the home side but when they did create openings they rarely troubled Ryan Clarke, several shots flying wide of his goal. However, on 49 minutes Husin finally found the target after the ball broke kindly to him around 15 yards out. This blow did wake City up somewhat and they began to pose more of an attacking threat but they couldn’t fashion any clear chances and Dartford continued to look the more likely to add to the scoring. As the game entered its final minute City did have the ball in the net, from a now trademark close-range Tommy Conway finish, but his effort was ruled out for offside, and despite applying some further pressure in stoppage time they couldn’t deny Dartford a fifth successive home win over the Romans.