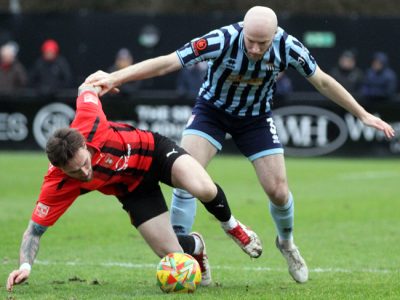 A 95th minute goal saw City exit the FA Trophy at the hands of Bracknell Town this afternoon. The game had reached that stage goalless and looked to be heading for a penalty shoot-out but from a third stoppage time corner Danny Greenslade could only block the ball back to Dean who curled a shot into the top corner to settle the tie. The understandably heavy pitch had largely negated City’s passing game during the first half. The hosts seemed to cope better with the conditions and twice tested Ryan Clarke, the keeper saving Grant’s 17th minute shot with his legs then turning a free-kick over the bar. The second half began with Dan Hayfield seeing his shot strike the bar but, although City began to pose more of an attacking threat, this would be as close as they’d come to scoring. By contrast, Bracknell continued to look the more likely scorers, one shot flashing narrowly wide then Abisogun blazing a great chance over the bar. Clarke had to be at his best on several occasions and it appeared this would be enough to take the game to penalties. However, the Robins had other ideas and finally broke City’s resistance to secure a third National League South scalp and place in the 5th Round draw.