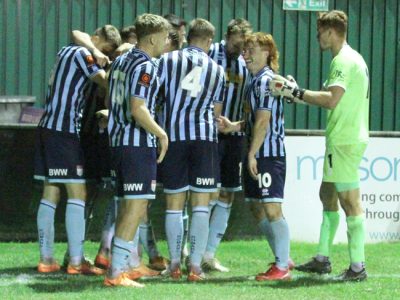 An Alex Fletcher header in the second half of extra-time saw City edge past Hartley Wintney in the FA Cup 2nd Qualifying Round Replay this evening. He reached Chris Lines’ 113th minute free-kick ahead of keeper Desbois to break the hearts of the home side who had enjoyed the better of the game for long spells. Joe Wright was forced into an early double stop from Nuur and McLeish-White and produced several other good stops. City also tested Desbois on a couple of occasions and had the ball in the net midway through the first half only for the linesman’s flag to rule out Tom Smith’s neat finish. The second half saw City struggle to keep possession but they defended resolutely in the face of considerable pressure from the Row to take the game into extra-time. The Hampshire side appeared to run out of steam in the extra period, with a penalty shoot-out looking like it would be needed to separate the sides, until Fletcher struck to secure a 3rd Qualifying Round home tie with Sevenoaks Town.