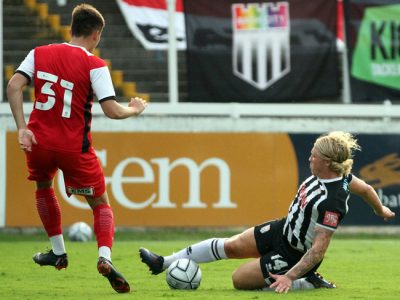 City and Exeter City played out an entertaining pre-season match at Twerton Park this evening, with the League Two side coming out on top by the odd goal in seven. Former Roman Alex Hartridge volleyed an early chance just over the bar and Nombe then saw an effort strike the foot of the post but on 17 minutes neat build-up play ended with Dodd stroking the ball home to put the Grecians in front. Then on the half-hour a turn and shot by Nombre made it 2-0. City had largely been second best up to this point but on 39 minutes they pulled a goal back, Omar Holness’ pass forward finding Alex Fletcher, and his perfect cross was drilled home by Cody Cooke. Early in the second half Fletcher held off Hartridge to break clear but he could only lift his shot over the bar at full stretch. A poor pass out of defence by Dan Ball allowed Exeter to restore their two-goal advantage on 57 minutes, Nombe beating Will Fuller from eight yards. The visitors changed their entire outfield line-up shortly after this but two goals in five minutes for City levelled the scores. On 76 minutes Cooke’s ball across the ball saw Tom Richards shot deflected into the net by Tom Smith, then in the 81st minute Smith showed great strength and composure to make it 3-3. However, City were to be denied a morale-boosting result two minutes when Jay found just enough room on the edge of the box to beat Fuller with a low shot.