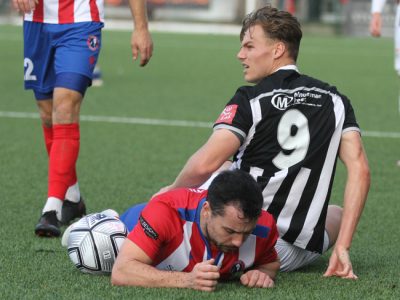 Despite taking the lead through an 8th minute penalty, City suffered a 4-1 defeat at Dorking Wanderers this afternoon. The home side had already seen one effort strike the post before Alex Fletcher was upended in the box by Harris and Cooke made it nine goals for the season from 12 yards. This was as good as it got for the Romans though as Dorking levelled on 20 minutes, Briggs crossing for Rutherford to steer the ball home. And 12 minutes later the roles were reserved as Rutherford’s centre was headed past Murphy Mahoney by Briggs. A change in formation did see City began to deny Dorking the space they’d previously enjoyed and this pattern continued into the second half. However, they rarely threatened an equaliser and any hopes of a late flurry disappeared ten minutes from time when McShane struck twice in as many minutes, converting Briggs’ low cross then tapping home after Rutherford’s initial effort was parried by Mahoney.