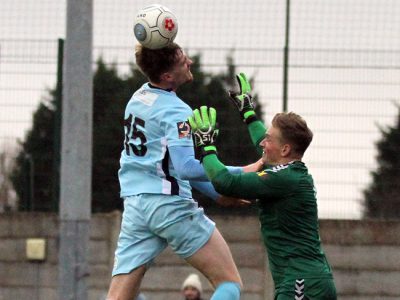 Goals from Robbie Cundy and Joe Raynes ensured City ended 2018 on a winning note this afternoon, easing past Weston Super Mare at a cold and damp Woodspring Stadium. After City started on the front foot, Ross Stearn blasting their best chance high over the bar, the game became more evenly balanced. Both sides had built promising openings without being able to apply the finishing touch until the 22nd minute when City took the lead. A Stearn free-kick was sliced high into the air by Weston’s Lee and, as Purnell raced off his line, Cundy timed his leap perfectly to head it over the keeper. Chances continued to fall at both ends of the pitch but the interval was reached with just this single goal separating the two teams. The second half began with Dowling testing Ryan Clarke from a free-kick and Tom Smith firing over the goal from eight yards out. This miss was soon forgotten though when a 52nd minute cross-shot from Raynes curled over Purnell into the net via the right-hand post to double City’s lead. The Seagulls would have still harboured hopes of getting back into the game but six minutes later they suffered another blow when captain Cane was sent off for a second bookable offence. City could now comfortably control the game with Adam Mann and Stearn going close to adding a third goal and any attacking threat the National League South basement side could still produce confidently dealt with. The win keeps City in 8th place but now just a single point off fourth place and right in the play-off hunt going into the second half of the season.