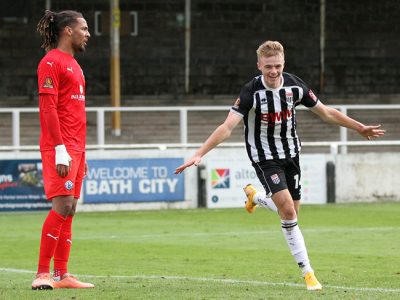 Tommy Conway netted a second successive Twerton Park double to fire City to a 2-0 win over Billericay Town and record their first league victory of this fledgling 2020-21 season. Although the visitors dominated possession for much of the 90 minutes they rarely troubled Ryan Clarke in the City goal, with Jack Batten especially impressive in the rock-solid Roman backline. The tone of the game was set in the opening 20 minutes, with City struggling to get out of their own half but Billericay were restricted to one on target effort, Clarke blocking Felix’s shot. It wasn’t until the 24th minute that City had a meaningful attack but from it they took the lead. Freddie Grant fed Freddie Hinds down the left flank and his low cross was fired into the roof of the net by Conway. Buoyed by the goal after this City enjoyed their best spell of the game, Hinds’ directing a long range effort straight at Henry and Tom Smith almost turning Callum Evans’ far-post free-kick home. Billericay had a strong penalty shout waved away when Reason went down under a challenge by Evans before the half ended with City’s no.8 seeing a cross drop onto the top of the crossbar. The second half started with an overhead kick from Hutchinson striking the bar but this turned out to be a rare close call for City. In fact, it was City who came closest to scoring again on 64 minutes when Conway shot into the side-netting. Billericay’s struggles to turn possession into chances continued and a second goal on the break began to look a possibility for City, Smith wasting one such opening with a poor final ball, and Conway seeing a shot blocked on the line after rounding Henry. However, three minutes into stoppage time the game was made safe, once again Hinds providing the chance for Conway, who had a simple tap-in from six-yards.