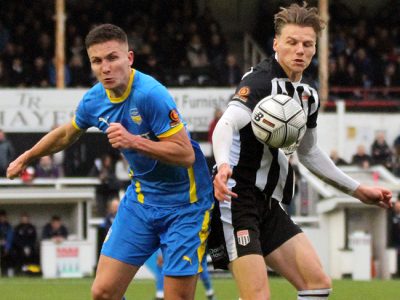 A late strike from top scorer Cody Cooke saw City make a welcome return to winning ways against Concord Rangers at Twerton Park this afternoon. The Romans dominated the first half and went ahead through Jordan Dyer’s 10th minute strike before the visitors began to push them back after the interval, levelling from the penalty spot on 56 minutes. However, with 10 minutes left Cooke latched onto his own header to round keeper Roberts and fire into the roof of the net. After an uneventful opening 10 minutes, a corner was headed toward goal by Callum Wood where Roberts could only push the ball back out to Dyer to blast it into the net. Lifted by this start City really should have been out of sight by half-time. A cross shot by Elliott Frear almost deceived Roberts then the busy keeper denied Cooke from a tight angle. The returning Mo Touray was unlucky to see his 30th minute shot from the edge of the box strike the post but probably should have scored nine minutes later after Roberts could only parry Alex Fletcher’s shot, a defender blocking his shot on the line. Having largely been a spectator Ryan Clarke had to be alert right on half-time to grab the ball ahead Babalola but the visitors began the second half strongly. They had already had one penalty shout waved away before Reynolds went down under Jack Batten’s challenge just inside the box allowing Green to convert from 12 yards. Concord continued to enjoy the majority of possession after this but City defended resolutely and began to pose an attacking threat again as the game moved into its final quarter. Cooke had already seen a shot narrowly clear the bar but he wasn’t to be denied five minutes later. Fletcher could have made the game safe shortly after this but City saw the remaining time out with few scares to secure the three points.