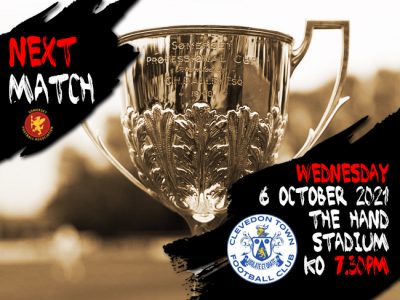 Following the fine performance in the FA Cup at the weekend City turn their attention to another knock out competition on Wednesday when they travel to Clevedon Town in the Somerset Premier Cup.

Although this tournament is never at the top of the Club’s priorities it is usually seen as a good opportunity to provide a competitive match for those on the fringe of the team as well as those younger players in the under 18 squad.

In fact City have won this cup twenty times since 1946 which is more than any other club in the county. The most successful period was between 1980 and 1995 when the trophy was clinched on nine occasions.

In contrast we have only reached the final twice in the past 26 years, a defeat in 2000 by Bristol City at Clevedon’s Hand Stadium and victory over Paulton Rovers in 2008 at Twerton Park.

Since then Weston Super Mare have been the most successful club, winning the cup four times including the last time it was contested in 2019/20. That season City exited in the second round at Taunton.

We have faced Clevedon 14 times in the Somerset Cup, winning seven and losing three which have all come in our last four meetings. The most recent was the 2002 semi final while the stand out scoreline came a decade earlier when four goals from John Freegard helped City to an 8-0 win at Twerton Park.

Clevedon are currently playing in the Western League Premier Division, lying in 13th place with 13 points from 12 matches. Their involvement in the FA Cup did not last long with a 6-1 defeat to Bishops Cleeve back in early August.

The two clubs may be three levels apart but at the turn of the century we faced each other on six occasions in the Southern League. The most significant was our visit to the Hand Stadium in March 2000 which resulted in wild celebrations hundreds of miles away in Lincolnshire!

That season City and Boston United were locked in a terrific battle at the top of the league. While trailing in second place, we were on a 17 match unbeaten run and had games in hand on Steve Evans’ team.

However a disastrous 3-0 defeat to Clevedon that evening in front of 1005 spectators proved to be the turning point of that season with City winning only one of their remaining ten matches and finishing in 4th spot. Meanwhile Boston became champions and within two years were a Football League club.

Those supporters wishing to travel to the Hand Stadium on Wednesday should note that the Supporters Club will not be running a coach and that it is not possible to make the trip by train. By car the drive is likely to take just under 1.5 hours.