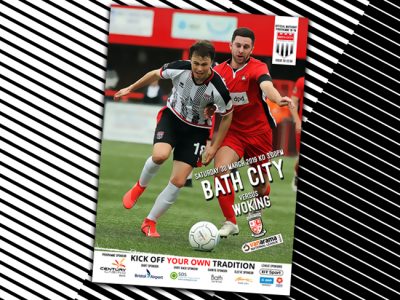 There’s a big game at Twerton Park on Saturday and it’s one you won’t want to miss! The Romans take on title-chasing Woking in the Vanarama National League South. Kick off – 3PM!

City extended their unbeaten run to six games last weekend and sit firmly in the Vanarama National League South play-off battle after a goalless draw at a windy Eastbourne Borough. Although The Romans would have hoped for a better result prior to the match, a point was fair and it still leaves a healthy six point cushion between them and the sides looking to sneak into the play-offs. This week, Jerry Gill and his players will be preparing for the visit of high-flying Woking at Twerton Park on Saturday and it’s set to be a thriller!

The Cardinals, who are one of this season’s title contenders, return to Twerton Park for the first time since our play-off final heroics back in May 2010. Despite falling to defeat that day, promotion to the Conference was achieved only a couple of years later and they stayed at the top of the non-league pyramid until their relegation last season. This season, manager Alan Dowson has galvanised the Surrey club and they’ve had an impressive return to the Conference South. The former Hampton & Richmond boss has seen his side feature in the top two since the end of October and they look set to challenge Torquay United for the title.

The reverse fixture back in October saw City run out 3-1 winners at the Kingfield Stadium, in what was a superb away performance from Jerry Gill’s men. Goals from Adam Mann, Robbie Cundy and Anthony Straker were enough to earn all three points that afternoon and extend an unbeaten run against The Cardinals which stretches back to 1995!

There’s now only three games left at Twerton Park this season and The Romans need your support as they look to do the double over Woking and further secure their place in the play-offs. It’s likely to be a big crowd so gather family and friends and head along to Twerton Park on Saturday!

Home fans – We are expecting a large crowd on Saturday so buy in advance or get to the ground early for quicker entry! Turnstiles open from 1:45PM.

Away fans – This game will be segregated. Be sure to arrive early for faster entry into the Bristol End. Turnstiles open from 1:45PM.

Parking🚗: Unfortunately due to works being undertaken at the site this weekend we are not able to use the Curo overflow parking facility for this Saturday’s game. If you wish to park at Twerton Park, you will need to arrive earlier than usual to secure a space. If you are parking in the surrounding area, please park safely, legally – and with consideration for our neighbours.

Charlie’s Bar🍺: There will be two mini kegs of Bath Ales’ Gem given away in our free raffle after the Post Match Interviews! Just head into the bar after the game to pick up your ticket. Must be 18 and over to enter. Guest ales – Bath Ales’ Anthem (3.8%) and Milk Street’s Funky Monkey (4%). Unfortunately, Charlie’s Bar won’t be open at half time and we won’t be able to take orders on Ordoo.

Club Shop⚽️: Our Club Shop will be open pre-match and post-match as usual! Still after one of our bespoke home shirts? The final order is now in (S/M/L/2XL/3XL)!