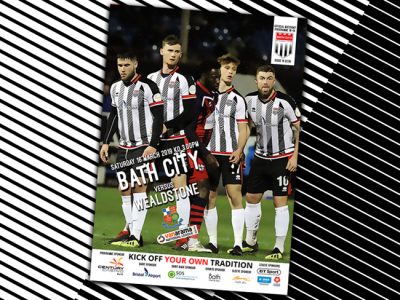 The Romans are back at Twerton Park on Saturday for another big game! High flying City take on play-off chasing Wealdstone on home soil. Kick off – 3pm!

Jerry Gill’s men climbed up to third on Tuesday night after a solid defensive display against Hampton & Richmond. Jack Batten’s first league goal of the season gave City all three points in a match played in tricky conditions. The centre half also played a key role in helping to keep another clean sheet – City’s fifteenth of the campaign. It’s now the turn of Bobby Wilkinson’s Wealdstone to visit Twerton Park and it’ll no doubt be another tough game as the end of the season draws nearer.

Wealdstone are currently in 8th place, just one place outside of the play-offs. The Stones have had a Jekyll and Hyde season up to now with their home form being completely the opposite to their away form. One win at home since October would normally spell trouble for any club but their impressive away form has not just kept them away from the relegation zone, it’s left them in the race for promotion. Just one defeat on the road since August, coming at the hands of our local rivals Chippenham, means that they’re still breathing down the necks of those that currently sit in the play-offs. Former Roman and current Wealdstone striker Dave Pratt will make another return to Twerton Park after his departure in 2016. City’s leading goalscorer in the Conference South has notched up 11 goals so far this season and will no doubt be a threat for The Stones on Saturday afternoon.

Manager Jerry Gill has urged City fans to turn out in numbers this Saturday:

“I’m calling all the fans out. We need over a thousand here on Saturday, we really do. It’s a massive game against Wealdstone. A couple more results might see us consolidate and stay in this play-off spot. We need a big crowd this Saturday getting behind us.”

It’s set up to be a proper business end battle at Twerton Park and the City boys will need your backing on the terraces! Gather up family and friends, head to Twerton and get behind The Romans as they push for promotion!

Charlie’s Bar🍺: There will be two mini kegs of Bath Ales’ Gem given away in our free raffle after the Post Match Interviews! Just head into the bar after the game to pick up your ticket. Must be 18 and over to enter. Guest ales – Bath Ales’ Lansdown IPA (5%) and Salcombe Brewery’s Devon Amber (3.8%).

Club Shop⚽️: Our Club Shop will be open pre-match and post-match as usual! Still after one of our bespoke home shirts? The final order is now in all sizes except XL! We also have a new batch of beanie hats too! Don’t miss out.