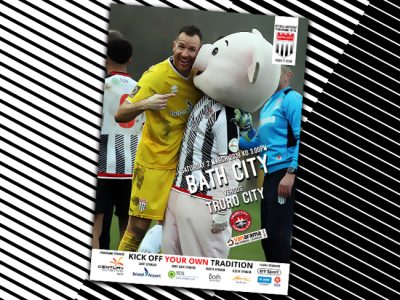 The Romans’ push for promotion continues on Family Day at Twerton Park! City take on Truro City in the Vanarama National League South. Kick off – 3pm!

After recording two straight defeats, City bounced back superbly by securing a hard-earned victory over Slough Town last weekend thanks to goals from Bristol City loanees Freddie Hinds and James Morton. Jerry Gill and his players will be wanting to kick on from that performance when they face Truro City at Twerton Park!

The Cornish side, who have recently returned home to Treyew Road after a stint at Torquay’s Plainmoor, currently sit in 17th place in the National League South. Last season the club reached the FA Cup First Round and the National League South play-offs but this season the club’s ongoings off the field have created most of the headlines. Delays with the ‘Stadium for Cornwall’ and the near two-hour drive to home games at Plainmoor have arguably hampered their progress this season. Despite the problems with their ground, The White Tigers have pulled themselves away from the relegation zone and have one of the league’s top scorers in their ranks, ex-Roman Tyler Harvey. City’s back-line failed to stop the frontman back in October when the two teams played out a 1-1 draw at Plainmoor and they’ll certainly be wary of the threat this Saturday!

With just ten games left of the 2018/19 season, every point is crucial and Jerry Gill and his players will be hoping for three more when they take on Truro City on Family Day! Bring family and friends, head along to Twerton Park and get behind the City!

Paper tickets will not be issued in advance, just come to the ticket window on the day, bringing a copy of your confirmation email and order number, where your names will be on the list.

Charlie’s Bar🍺: There will be two mini kegs of Bath Ales’ Gem given away in our free raffle after the Post Match Interviews! Just head into the bar after the game to pick up your ticket. Must be 18 and over to enter. Guest ales – Bath Ales’ Frosty Hare 3.5% and Dartmoor Brewery’s IPA 4%.

Club Shop⚽️: Our Club Shop will be open pre-match and post-match as usual! Be sure to stock up on your City essentials on Saturday!