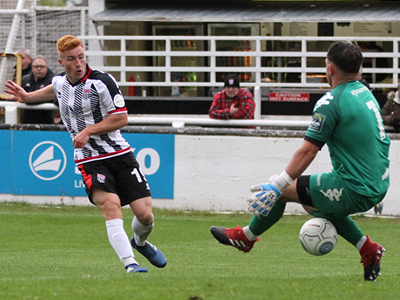 City moved into the FA Cup 4th Qualifying Round with a comfortable 3-0 win over Bostick League Lewes FC at Twerton Park this afternoon. As in the previous round at Banbury United, the Romans largely controlled the game against the lower league side, although it wasn’t until first half stoppage time that they broke the deadlock. Prior to that both sides had enjoyed good spells and created several chanches, the closest for City when Adam Mann’s low shot flew across the face of goal. Then Ryan Clarke had to be at his best to turn Lawson’s curling shot over the bar. But with the last action of the first half Ross Stearn’s cross was converted by Ryan Brunt from six yards out to send City into the interval ahead. And they doubled this advantage within six minutes of the restart through as Mann burst foward before firing home from 20 yards. Now in full control of the game City went in search of a third and it duly arrived with 19 minutes left when Tom Smith ran onto Jack Batten’s through ball and slotted it under Carey.

The draw for the 4th Qualifying Round will take place live on Talk Sport 2 around midday on Monday.