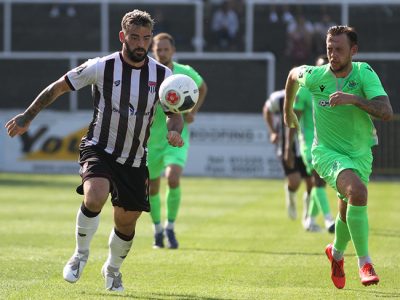 For the second time over the Bank Holiday weekend City tasted defeat after surrendering a half-time lead, this time Oxford City striking twice after the break to secure the three points in the Twerton Park sunshine. City had been good value for their advantage at the interval, given to them by Tom Smith’s close range finish on 28 minutes from Tyler Harvey’s cross-shot. Further chances had fallen to Smith, Harvey, Adam Mann and Ross Stearn, and City also won numerous corners that the visitors struggled to deal with. Oxford had shown little as an attacking force but five minutes after the break an unmarked Moore-Azille headed them level. Neither side could get on top after this but with around fifteen minutes left incidents at either end of the pitch involving Joe Raynes turned the game in favour of Oxford. First he burst forward before unleashing a 20-yard shot that had King in the away goal well beaten only for the ball to crash against the post. Two minutes later Brown got in behind the City defence and went to ground under Raynes’ challenge. The referee pointed to the spot from where Brown confidently sent Ryan Clarke the wrong way. City pushed forward looking for a way back into the game but couldn’t find a way past the neon-green clad Oxford rearguard and were left to reflect on another second half disappointment.