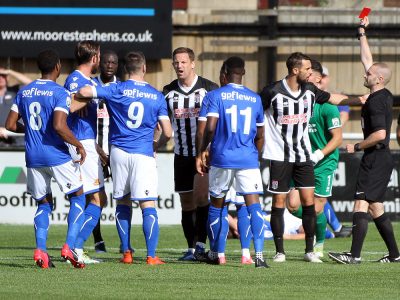 City and Wealdstone drew 0-0 at a warm and sunny Twerton Park this afternoon with both sides ending the game with ten-man. City’s saw red with less than five minutes on the clock. Darren Jones’ sliding challenge as Green raced clear on goal appeared to win the ball but the referee viewed that he caught the man first and sent the City captain off. The free-kick came to nothing and moments later numbers could have been levelled when Wealdstone keeper North handled outside his box, but he escaped with just a booking. Despite their numerical advantage the visitors rarely looked capable of breaking down City’s well-marshalled two banks of four, with Nat Jarvis ploughing a lone furrow up-front. In fact, it was the City no.9 who came closest to scoring before half-time, heading a great Jack Compton free-kick wide from close range. The second half continued in the same manner but if the Stones hoped to make their extra-man count as the game progressed and City tired this disappeared just before the hour mark when Sellars tripped Andy Watkins to earn his second yellow card. Both sides went in search of a winning goal after that and again it was City who came the closest, substitute Jamie Lucas creating an opening only to blast the ball high over the bar. A couple of late set-pieces gave Wealdstone’s large travelling contingent hope of a last gasp winner but they came to nothing and a league game at Twerton Park ended goalless for the first time since October 2015.