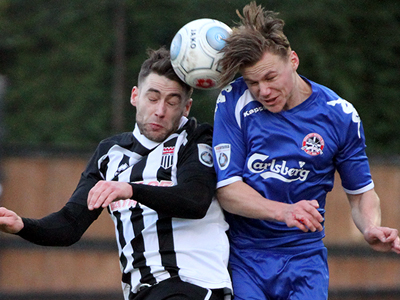 City began their 2018 campaign with a 0-0 draw against title-chasing Truro City at a cold and damp Twerton Park this afternoon. City probably shaded the contest over the 90 minutes, although it was the Cornish side who came closest to scoring when they struck the bar midway through the second half. And City also finished the game with ten men after Dan Ball received a second caution in the final minute. Both sides produced some promising build-up play during an even first half but couldn’t covert this into clear sights of goal. City’s best chance came when visiting keeper McHale raced out his box only to chest the ball toward Tom Smith. He did well to bring the ball down but lifted the shot well over the unguarded goal. Luke Southwood in the City goal only had one nervous moment when ex-Roman Noah Keats’ 30-yard effort almost squirmed underneath his dive. After a quiet opening to the second half City had an escape when Cooke’s header thudded against the crossbar on the hour mark. This seemed to wake City up and they spent the remainder of the game on the front foot. However, they couldn’t fashion more than a series of half-chances, the closest falling to the returning Ross Stearn when his rising shot just cleared the bar. A late 25-yard Jack Compton free-kick was directed too close to McHale leaving City with a fifth successive Twerton Park blank and the last incident of note saw an innocuous foul by Ball on the halfway line earn him a first red card in his 231st game for the club.