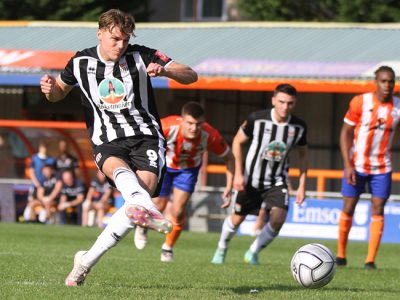 City withstood a long throw bombardment this afternoon in Essex to return to winning ways in a 3-1 victory over previously unbeaten Braintree Town. It was a baptism of fire for keeper Will Fuller but, with Ben Gerring leading a superb defensive performance in front of him, it was a winning Romans debut for the former Cardiff Met shot-stopper. With unusually long grass on the Cressing Road pitch City were forced to play a longer game than normal but had shaded the opening half an hour before going ahead on 33 minutes from the penalty spot. Alex Fletcher’s header from a Jack Batten cross was blocked  by Ikeuasi’s arm and Cody Cooke sent Edwards the wrong way from the spot. The hosts levelled four minutes after the break when Fuller failed to deal with a corner allowing Johnson to bundle the ball home. However, two minutes later City were awarded another penalty, this time after Davidson handled Elliott Frear’s cross, and Cooke repeated his exploits from 12 yards. From then on it was a case of the Iron’s goalscorer Johnson launching virtually every throw-in in the City half into box but time after time it was a Roman head that dealt with this one-dimensional attack. By contrast City had looked the more likely scorers on the break, Cooke, Omar Holness and Mo Touray all going close, before in the final minute Touray set up Alex Fletcher to seal the win with a neat shot across Edwards into the corner of the net.