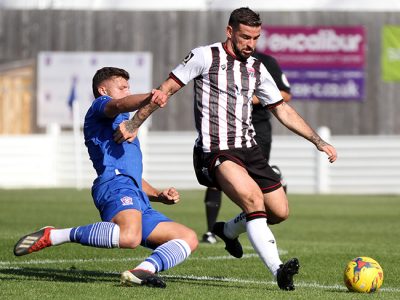 City made light work of a potentially tricky FA Cup tie at Swindon Supermarine this afternoon, running out comfortable 4-0 winners in the warm Wiltshire sunshine. A first minute shot from the hosts that flew narrowly wide may have given City early concern but this turned out to be as close as Supermarine would come to scoring until the closing minutes when a header narrowly cleared the bar. With Owura Edwards causing the home side problems down the flanks, City slowly began to build pressure. The Bristol City loanee forced a good stop from Horsell on 13 minutes then the keeper had to push Harry Hamblin’s well-struck shot away seven minutes later. They finally made this dominance pay on 37 minutes when Ryan Brunt nodded home Edwards’ cross at the far post. There was little change in the pattern of the game after the break and on 62 minutes Tom Smith doubled City’s advantage with a crisp shot into the roof of the net. Six minutes later the result was put beyond doubt when Andy Watkins ran onto Ross Stearn’s pass to slide the ball past Horsell. The only downside of the afternoon saw Edwards limp from the action ten minutes from time with a knee injury, which saw City play out the remaining time with ten men having already made three substitutions. This didn’t stop them adding a fourth goal with three minutes left though, Matt Bower heading home a Connor Riley-Lowe corner for his first goal for the Romans.