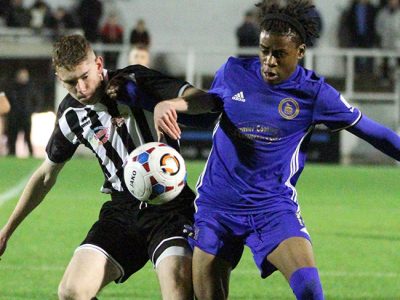 City’s U18 side progressed to the FA Youth Cup 2nd Round this evening with a thrilling 3-2 extra-time victory over Andover Town. After an even first half, where City had a goal ruled out for offside and Andover struck the post, the visitors went ahead four minutes after the break, Mpongo steering a cross past Harvey Wiles-Richards. Andover looked in control of the game now but they couldn’t find the vital second goal, several times being denied by Wiles-Richards. And with 11 minutes left City made them pay as Leo Eglin pounced on a loose ball in the box to crash a shot against the underside of the crossbar and down just behind the line. Six minutes later it got even better for Billy Clark’s side when substitute Shaquille Perkins broke into the box to fire home from eight yards. However, Andover didn’t give up and in the final minute of stoppage time Nicholas equalised from close range. Having given their all in the 90 minutes both sides now faced an additional half an hour but still produced a engrossing extra-time period. Seconds before the interval City regained the lead when a corner was cleared as far as Joe Gigg and his first time shot found the corner of the net. And despite several nervous moments in the final 15 minutes of the game, as Andover threw everything they had left at City, that turned out to be the winning goal.