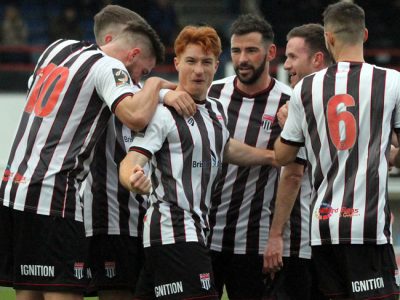 City ended a remarkable 29-year wait for a win over Dartford this afternoon at Twerton Park. The Kent side had won the last seven meetings between the sides but had no answer to a dominant first-half performance from the Romans, where they struck three times. It took City just nine minutes to take the lead, Adam Mann sending Tom Smith clear on goal and he lifted the ball past his namesake in the Dartford net for his 10th goal of the season. Then on 25 minutes Smith turned provided as he set up Andy Watkins fire into the roof of the net. And nine minutes later City made it 3-0 when Watkins guided a header past Smith from a free-kick. The second half began with City largely keeping Dartford at bay and fashioning several half chances to extend their lead. The visitors were handed a great chance to pull a goal back on 68 minutes when Frankie Artus was adjudged to have fouled Gordon in the area but Romain blazed the penalty high over Ryan Clarke’s goal. That turned out to be City’s final real scare as they comfortably saw out the remaining time, almost scoring a fourth when debutant Louis Britton fired a stoppage time shot into the side-netting.