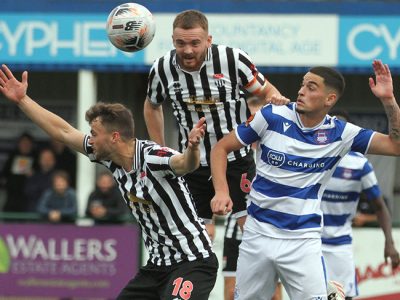 City produced a stunning second half comeback to grab a point in an eventful 3-3 draw against Oxford City this afternoon at the RAW Charging Stadium. A strangely lacklustre first half performance from the Romans has seen the home side race into a three-goal lead without playing especially well themselves. On seven minutes a long ball forward saw Parker get goal-side of Joe Raynes to slide a shot past Joe Wright. Then on 20 minutes Williams-Bushell was fouled in the box by Tom Smith and Lolos netted from the penalty spot. And just before the interval the Hoops appeared to have secured the win when a poor clearance was turned back toward goal by Ashby for Parker to tap in his second and Oxford’s third goal. There was little sign of a change in fortunes during the early stages of the second half until on 56 minutes Chris Lines limped off – joining Joe Raynes who had suffered an ankle injury during the first half – to be replaced by Rex Mannings for his first outing in a City shirt. Within six minutes he broke forward before finding the corner of the net with a low shot from 20 yards out. Lifted by this five minutes later Fletcher made it 3-2 with a neat finish after being played in on goal by Luke Spokes. The comeback was complete in the 70th minute, although in somewhat controversial circumstances. Manning’s cross was clearly blocked by an Oxford defender’s arm but it appeared to be just outside the box. However, the referee thought differently and pointed to the spot, from where Cody Cooke netted goal number nine of the season to level the scores. City almost grabbed the lead on 76 minutes when Fletcher’s flying header was directed too close to keeper Dudzinski but the momentum they had built was lost with six minutes left when referee Mr O’Connor suffered a leg injury and couldn’t continue. After a delay of around 12 minutes a replacement official was found in the crowd but the remaining playing time passed without any clear openings at either end.