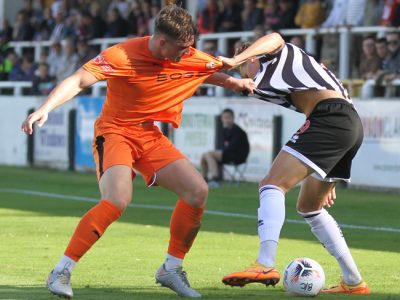 City face a trip to Hampshire on Tuesday evening after they let a two-goal half-time lead slip against Hartley Wintney in the FA Cup 2nd Qualifying Round at Twerton Park this afternoon. City looked to be in full control of the tie after they struck twice during the latter stages of the first half. On 34 minutes Alex Fletcher turned the ball home after Cody Cooke’s initial shot had come back off the inside of the post. And eight minutes later Cooke latched on to Tom Smith’s pass to fire home his eighth goal of the season. The Southern League Premier Division South side grabbed a lifeline with twenty minutes left when Joe Wright produced a fine save only for the ball to fall kindly for Eshun to net from eight yards. And six minutes later they levelled the tie when Nuur curled a stunning 20-yard shot past Wright. City pressed forward in the remaining time – with The Row understandably now trying to slow the game down at every opportunity – but even with an additional six minutes they couldn’t deny the visitors a deserved draw.