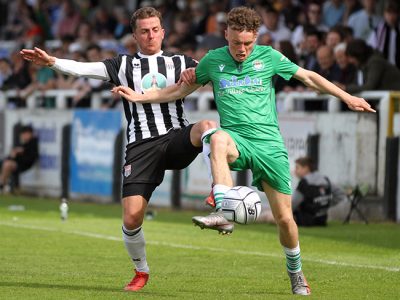 City came back from two goals down to draw 3-3 with Oxford City at Twerton Park this afternoon and finish their 2021/22 Vanarama National League South campaign on a positive note. City struck first after just two minutes, Alex Fletcher latching onto Cody Cooke’s pass before slotting the ball past Dudzinski. Cooke and Dan Ball went close after this as City continued to enjoy a bright start to the game. However, as the half progressed the visitors began to show why they are play-off bound, Bancroft seeing an effort hit the bar then only a great block by Eddie Jones keeping City’s lead intact. So, it was no surprise when good work from McEachran and Harmon set up Iaciofano to steer home a 25th minute equaliser. And it was Oxford who went into the break ahead when Bancroft converted Clark’s low cross from eight yards out on 42 minutes. Cody Cooke saw his header come back off the bar nine minutes into the second half but it was the visitors who moved further in front on 58 minutes thanks to McEachran’s great 25 yard strike. City would have feared a repeat of the reverse fixture back in August when they were beaten 5-1 after taking a first half lead, but a great 63rd minute Elliott Frear cross was headed home by a diving Fletcher to make it 3-2. Ryan Clarke produced a great save from his namesake on 69 minutes before, with 14 minutes left, another Frear cross was beautifully flicked across Dudzinski into the corner of the net by substitute Tom Richards. Frear’s last minute free-kick curled narrowly wide as City almost grabbed a late winner but it was still a upbeat finish to the league season, with a trip to Yeovil Town for the Somerset Premier Cup Final still to come.