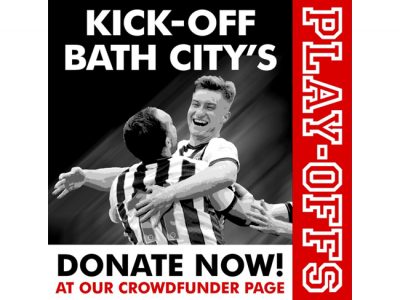 After just 72 hours, we’re now less than £2,000 away from the £35,000 target we set to compete in the promotion play-offs. Thank you to everyone who has contributed so quickly. It also means we’re well on our way to allocating 1,750 free tickets for NHS staff at some of next season’s matches. What an extraordinary show of generosity from you, our supporters, and from people across the city and the wider football family.

Thanks to over 300 people making donations totalling £12,372 without rewards attached, we still have a host of reward options available as follow:

Every one of the rewards helping towards more tickets for our the lockdown heroes.

We’ll continue to accept donations for all the Rewards and issue a further update in the next 24 hours.

Thank you so much for your support from everyone at Bath City.

Head over to our Crowdfunder page to find out more or make your own donation.