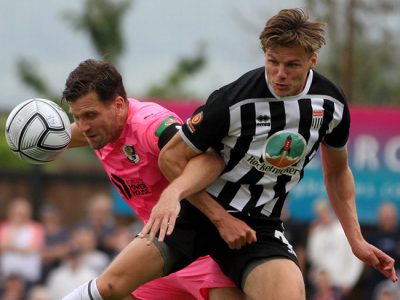 Despite a spirited second half display City couldn’t deny Vanarama National League South leaders Dartford a fifth straight victory, the Kent side running out 3-1 winners at Twerton Park this afternoon. Both sides could have scored in the opening ten minutes, Robinson being denied from close range by Ryan Clarke in the 4th minute before Tom Smith saw his shot cleared off the line four minutes later. The game settled down after this frantic start and it was City who next went close on 16 minutes, Omar Holness seeing his shot strike the outside of the post. The visitors went ahead on 30 minutes when a poor header by Ben Gerring allowed Robinson to cross for Azeez to head home. The Darts now began to show why they have started the season so well and grabbed a second goal on 45 minutes. Clarke did brilliantly to keep out Jebb’s initial effort but Azeez hooked the ball back across goal for Robinson to tap into the net. Any fears of a second half collapse like at Oxford on Monday were immediately dispelled as City tore into Dartford at the start of the second half. Within three minutes Marlee Francois saw his header hacked off the line by Jebb and then three minutes later Holness suffered the same fate, this time Bonner blocking a goalbound header. City finally got the goal they deserved just past the hour mark as a weaving run by Alex Fletcher left two Darts defender on their backsides before he steered the ball past Wilks. Roared on by a third 1000+ crowd of the season City pushed for an equaliser, though they had an escape on 70 minutes when Azeez broke clear only for Clarke to block his shot. Cooke then had two great chances in the space of five minutes to level the scores. Francois’ powerful 76th minute run and cross saw him volley over from close range, then he got in on goal but Wilks was out quickly to smother his effort. And three minutes later Dartford sealed the points as Roberts picked out Porter to turn and beat Clarke from six yards out.