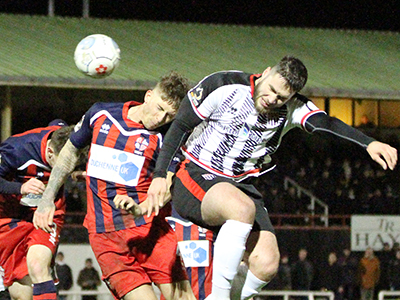 A Jack Batten header midway through the first half was enough to see City past a resolute Hampton & Richmond Borough side this evening at Twerton Park and rise to third place in the Vanarama National League South table. Although City weren’t at their sharpest attacking-wise the division’s best defensive unit stood strong against a Beavers side who had netted five goals on Saturday. After a largely forgettable opening 24 minutes to the game, Batten got in front of his marker at a Ross Stearn corner to head across goal where the linesman adjudged the ball had crossed the line despite Miller-Rodney’s clearance. The game livened up after this but City couldn’t fashion any further chances before the half-time interval. City began the second half on top, Hampton keeper Lovelock doing well to keep out a Frankie Artus header and James Morton, Joe Raynes and Freddie Hinds all seeing efforts come to nothing. Without the comfort of a second goal though City began to look a little bit nervous, with the visitors beginning to see the majority of possession. However, City’s backline was proving more than a match for the opposition and it wasn’t until stoppage time that a burst forward from Sprague threatened a goal. However, Clarke was alert to the danger, bravely saving at his feet, and a couple of minutes later the final whistle was blown to confirm that the vital three points in the battle for a play-off place were City’s.