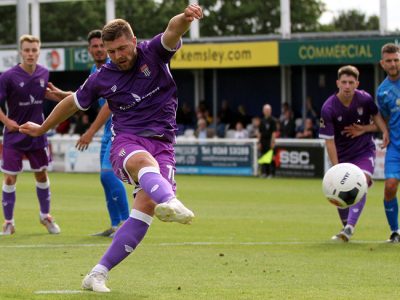 City secured a deserved point in a 1-1 draw at big-spending Billericay Town this afternoon. The home side came into the game boasting a 100% home record but, apart from a 15 minute spell after their opening goal, rarely troubled City and in the end Jerry Gill’s side may feel slightly aggrieved not to have nicked the three points. After a quiet opening to the game Billericay thought they’d opened the scoring on 15 minutes but the linesman’s flag ruled out Emmanuel’s effort. However, five minutes later the ball was in the net again and there was no reprieve for the Romans this time, Deering’s beautifully struck 25-yard shot giving Ryan Clarke no chance. City struggled to gain any meaningful possession for a while after this but they denied Billericay any further clear openings and slowly began to impose themselves back onto the game. Once again it was winger Owura Edwards who was City’s most potent attacking outlet and on 39 minutes his burst into the box was halted by McLennan’s lunge and Ryan Brunt blasted home the penalty kick via the underside of the bar. The second half was a more cagey affair, although City fashioned the better of the few chances. Tom Richards seeing his deflected shot drop just the wrong side of the post and from the resultant corner Edwards’ drive flew just past the same upright. The hosts best chance saw Robinson create a stoppage time sight of goal but his shot was charged down to ensure the points would be shared.