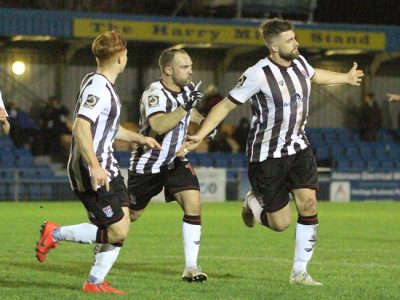 Ryan Brunt struck an extra-time winner, after missing a penalty in the final minute of normal time, as City beat Gosport Borough 3-2 in an FA Trophy thriller at Privett Park this evening. At half-time City looked to be cruising to a 1st Round place as Tom Smith fired them ahead on 28 minutes, racing clear from Adam Mann’s pass. Then just three minutes later Mann’s shot was saved by O’Flaherty but Joe Raynes reacted quickest to the loose ball to set up Andy Watkins to make it 2-0 from close range. An early second half save by Ryan Clarke showed that the hosts were not out of the tie and just before the hour mark Williams’ free-kick pulled a goal back. And four minutes later, just after Watkins had missed a great chance to restore City’s two-goal lead, Flood’s shot from 12 yards levelled the scores. Borough were now in complete control of the tie but couldn’t find a third goal and with two minutes left Brunt was hauled down in the box by Roberts. However, Brunt’s penalty was saved by O’Flaherty to send the game into extra-time. Gosport now looked content to take the game to penalties as City dominated the first half of extra-time, Alex Hartridge hitting the bar and Noah Chilvers curling a shot just wide. Into the second period Stearn and Hartridge had chances before on 112 minutes Brunt made space for himself before stroking a shot past O’Flaherty. Gosport were now forced to come out again but despite a few nervous moments, including a loud penalty appeal for handball against Chilvers, City withstood the pressure to secure a 1st Round meeting with either Sholing FC or Paulton Rovers.