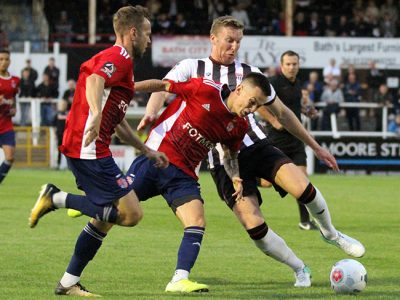 City ended their early season mini-slump with a convincing 3-0 victory over Hampton & Richmond Borough at Twerton Park this evening. On the back of three successive defeats Matt Bower was restored to the side, Bristol City loanee Owura Edwards made his long-awaited debut and Ryan Brunt was handed a first start of the season. And all three played a major part as Bower was named man-of-the-match, Edward terrorised the visitors down the right flank and Brunt grabbed two goals. His first came from the penalty spot on 17 minutes after he been felled by Pearce’s challenge. Hampton twice had penalty shouts of their own after this, but both times the referee adjudged the foul had taken place just outside the box and the free-kicks came to nothing. City began the second half on top, which eased any fears of a repeat of the second half collapses against Slough Town and Oxford City, and on 71 minutes Edwards and Tom Smith combined down the right and the latter’s low cross was steered home by Brunt to make it 2-0. And with eight minutes left a sweetly struck 20-yard shot from Tom Smith completed a very satisfactory evening for the Romans.