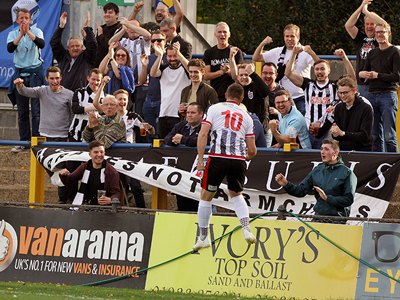 First half goals from Ryan Brunt and Adam Mann set City on their way to an excellent 2-0 win over St Albans City at Clarence Park this afternoon. After a couple of early shots straight at Ryan Clarke from the home side, City went ahead on 10 minutes when a low cross found it’s way to the far post where Brunt slide home his 8th goal of the season. On the back of their 5-2 FA Cup humiliation at Taunton Town in the week the Saints heads visibly dropped allowing City to take control and on 34 minutes Mann’s well-struck shot from the edge of the area made it 2-0. The second half saw the hosts enjoy more possession but they found City’s backline in imperious form, backed up by Clarke’s faultless handling, and chances were few and far between. City could have increased their lead as Joe Raynes’ shot was well saved by Snedker and Mann fired into the side-netting but it was a perfect away performance from the Romans which lifted them back into the play-off positions ahead of next Saturday’s massive FA Cup trip to Weston Super Mare.