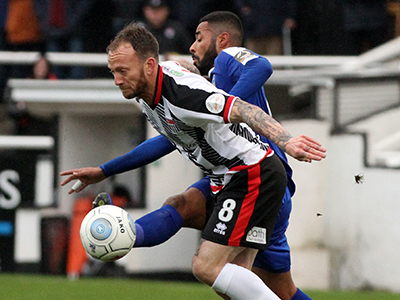 City and Concord Rangers shared the points in a hard fought 1-1 draw at a wet and windy Twerton Park this afternoon. The visitors came into the game as one of the form sides in the Vanarama National League South and for the opening 20 minutes showed exactly why, although they were helped with the elements in their favour during the first half. An early opening was blazed over the bar before Wall cracked a rising shot against the angle of post and bar. They had the ball in the net from a free-kick but an offside flag halted any celebrations. Ryan Clarke also had to be alert on several occasions but slowly City began to get a foothold in the game. They won a series of set-pieces which gave Concord keeper Beasant a few nervous moments but the game reached the interval goalless. However, it took City just three minutes after the restart to open the scoring, Adam Mann teeing up Sean Rigg for a low finish. City couldn’t really build on this advantage but with the Beachboys struggling to reproduce their earlier impressive play it looked as if it might be enough to secure the win. With eight minutes left, though, a goal out of nowhere levelled the score, Blackman turning the ball home at the back post, to spark exuberant celebrations on the Concord bench. Content with the point they comfortably kept City at bay for the remaining time and over the 90 minutes the draw was probably the right result.